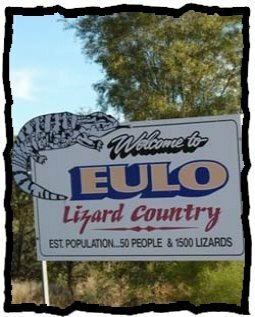 Eulo owes its existence to the fact that it is situated near a good waterhole on the eastern bank of the Paroo River and because it lies on the direct route of travel to the West.

Where did the name, “Eulo”, come from? Stories vary. One theory is that it was named after a European woman whose name was pronounced “Eulo” although the spelling was different. Another theory links the name to Aboriginal origins.

Some say it means a dry place/creek/river while others insist it means wet springs.  The original township was built closer to the river but was moved to higher ground (its current location), after floods almost wiped out the entire town.

The town of Eulo is situated on the Bulloo Developmental Road (Adventure Way) 70 km west of Cunnamulla and has a population of about 70 people. The township was originally built close to the Paroo River but as floods almost wiped out the entire town, building began on higher ground where Eulo now stands. Like most bush towns it has an interesting history. The most notable character was Isabel Robinson - the Eulo Queen. She was born in 1849 on the isle of Mauritius and migrated to Australia as a teenager. She arrived in Cunnamulla in 1878 and shortly afterwards moved to Eulo with her husband. The town's only pub carries her name and is where visitors can learn about her life and the early history of the town.

The rural land surrounding Eulo is predominantly used for sheep and cattle grazing, however, the area is well known for its rich flavoursome honey obtained from the blossom of the local native Yapunyah tree. Honey along with other natural products made from bees wax are produced at Eulo for the local and national market. Eulo has many attractions, such as the Lizard Lounge, a newly built picnic area, the Bilby Burrow art and craft gallery, a general store with a display of honey production, a date farm and winery open to visitors and mud springs just west of the town.